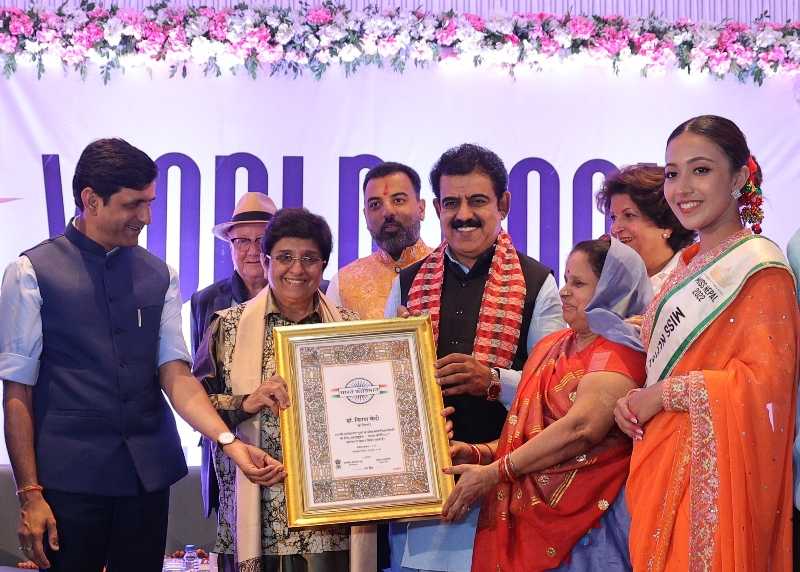 For matchless contribution in the betterment of society and reforming and rehabilitation prisoners of Tihar jail of New Delhi.

Indore: Former Lt. Governor Puducherry (India) Dr. Kiran Bedi, IPS was felicitated by Bharat Kirtimaan Alankaran 2022 for matchless contribution in the betterment of society and reforming and rehabilitation prisoners of Tihar Jail of New Delhi. The World Book of Records (India) and iudex international have instituted the Bharat Kirtiman Alankaran and the Lifetime Achievement Awards in the year 2017 with a view of giving recognition and motivation to the unsung Indian heroes across the world who are working hard for the betterment of the lives of the underprivileged. Bharat Kirtiman Alankaran is bestowed to personalities for matchless contribution in fields of justice, education, science, technology, environment, and holistic science, and spiritualistic awareness, social and cultural spheres to serve society. The Bharat Kirtiman Alankaran is conferred on the recommendations made by the jury of the award committee, which are submitted to the Chairman for approval.

Significantly, Dr. Bedi decided to turn Tihar into a model prison. She introduced several reforms. She arranged separate barracks for the hardened criminals, who had been using their time in prison to recruit gang members, sell contraband and extort money. She arranged vocational training with certificates, so that they could find a job after their release. During her tenure, Indira Gandhi National Open University and National Open School set up their centers inside the prison. Legal cells were set up to help the undertrials. Bedi banned smoking in the prison. She introduced yoga and Vipassana meditation classes to change the prisoners attitudes. She organized additional activities such as sports, prayer, and festival celebrations. She also established a de-addiction center, and pulled up or imprisoned the staff members involved in drug supply.

On being felicitated by Bharat Kirtimaan Alankaran 2022, Dr. Kiran Bedi, IPS was congratulated by prominent personalities from the international scenario.