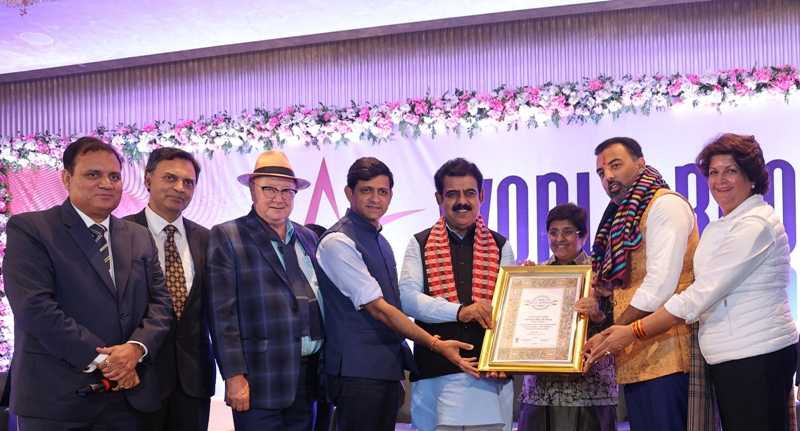 Indore: Maharaj Kumar Sahib Lakshyaraj Singh Ji Mewar of Udaipur, Rajasthan was felicitated by Bharat Kirtimaan Alankaran 2022 for matchless contribution in the betterment of society and promoting Indian Cultural Heritage. The World Book of Records (India) and iudex International have instituted the Bharat Kirtiman Alankaran and the Lifetime Achievement Awards in the year 2017 with a view of giving recognition and motivation to the unsung Indian heroes across the world who are working hard for the betterment of the lives of the underprivileged. Bharat Kirtiman Alankaran is bestowed to personalities for matchless contribution in fields of justice, education, science, technology, environment, and holistic science, and spiritualistic awareness, social and cultural spheres to serve society. The Bharat Kirtiman Alankaran is conferred on the recommendations made by the jury of the award committee, which are submitted to the Chairman for approval.

Significantly, being a philanthropist, educationist, sports patron, business leader, Maharaj Kumar Sahib Lakshyaraj Singh Ji Mewar of Udaipur has, since an early age, voluntarily and consciously dedicated himself to public service, upholding the cause of righteousness. He remains committed to building communities, improving the lives of ordinary people, and facilitating the task of nation-building. His belief in working for the greatest good of the greatest number stands firm. He has exhibited these rare human qualities which define his identity as a young Indian in service of a self-reliant and resilient India.

On being felicitated by Bharat Kirtimaan Alankaran 2022, Maharaj Kumar Sahib Lakshyaraj Singh Ji Mewar of Udaipur has been congratulated by prominent personalities from the international scenario.